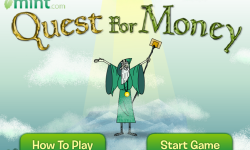 Mint.com, the popular budget site, has created an online game to help middle school students learn about money. Designed in partnership with Scholastic, Quest for Money is designed to teach young people about various money management skills such as budgeting and saving money.

Since we use Mint.com and are very satisfied with the service, I tested this new game expecting to be pleased with what I saw.  However, I was very disappointed.  Here’s why.

Exercises That Don’t Match the Goals

Players can choose among several spending goals, such as the purchase of a new wardrobe, a new computer, or tickets to an amusement park.  You roll electronic dice, move a game piece toward the objective, and answer questions along the way to earn money.  But the questions relate to other purchases that seem disjointed from the goal you’re pursuing.

For example, here’s one of the questions: “I really want a cell phone with a touch screen, but my parents said they will only pay for half.  I can:

A)   Start saving part of my allowance every week

Option B is the preferred answer.  While an argument certainly could be made for that answer, I thought the main goal was to buy a new wardrobe.  Isn’t this an opportunity to teach kids about making trade-offs?  If you really want some new clothes, wouldn’t it be better to hold off on the cell phone until after you accomplish the clothing goal?

No Explanations About the Best Answer

If you get an answer wrong, you’re not told what the game designers felt was the best answer.  Since there are often several answers that seem legitimate, it would be helpful to see an explanation as to why one answer is preferred over another.

There was also some inconsistency in the lessons being taught.  For example, in some cases, the best answer is one that involves not spending money, such as saying no to a designer sweatshirt when you already have one just like it or making a gift instead of buying one.  But there was one question about buying an expensive series of books and the option of checking them out of the library was not deemed to be the best answer.

Goofy Games Within the Games

Several times as you pursue a goal, you have to stop to play other games such as the Bank Deposit game where you drag coins onto a slingshot, aim, and fire toward a savings bag.  What is that teaching?

With the Avoid Spending Game, you’re told, “You’ll encounter many temptations along the path to your financial goal.  See how long you can keep you coins away from all the items you could spend them on.”  You then click and drag a coin around the screen trying to dodge objects you’re supposedly tempted to buy as they fly at you.

With, It’s Raining Cash, you’re reminded that, “Saving money isn’t always easy.  Watch out for items that could keep you from reaching your goal.”  You then drag a savings bag from left to right, trying to catch money as it rains down on you.

How these games teach anything related to wise money management, I have no idea.

If they were designed to break up the flow of questions and make the whole experience more enjoyable, I doubt that the pong-like quality of the games will do much for a target group that is accustomed to playing Wii and Xbox games.

Another problem I noticed is that some of the questions seem gender-specific and yet the game is designed to be gender neutral.  For example, one question has to do with funding a trip to a spa to get a manicure and facial.  I’m going to go way out on a limb and guess that there aren’t many middle school boys that are in the market for such things.

And lastly, one question asked about going to see the latest vampire movie.  Some kids come from homes in which their parents won’t let them see such movies, so why couldn’t they just say the latest teen movie?

I’m generally a fan of Mint and I believe more needs to be done to help kids learn about money, so it pains me to have to write a thumbs-down review of Quest for Money.  I really wanted to like it.  However, this game is not up to Mint’s standards, nor do I believe it’s going to do much to help improve kids’ financial literacy.

What do you think?  If you have a middle school student in your house, please ask them to play the game and let me know their feedback.

If you haven’t done so already, please sign up for a free subscription to this blog.  Two or three times a week, you’ll receive ideas and encouragement for using money well.

Why Two Savings Accounts Are Better Than One
Nobody’s Fool 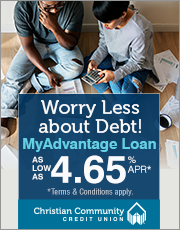