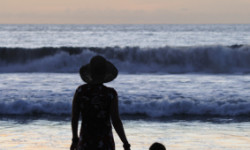 When my friend, Craig, lost his mom to cancer, it was a defining experience for him. He loved his mom. That was obvious by the moving tribute he gave during her memorial service. But he often thought of her simply as a hard-working, low-income single mom, not as a woman of significant influence.

During a reception after the service he was surprised at how many people talked about that very thing—his mom’s influence. Some said her example made them better moms. Others said she influenced them to serve more or to be more forgiving.

Less than a month after the service, Craig talked to a good friend, Mark, who had been there. One week later Mark had been to another memorial service, this time for an extremely successful businessman.

Mark said that at the businessman’s service, people talked about his business skills and career success. At Craig’s mom’s service, people talked about her generosity and kindness. During gatherings with friends or family, she was always the last one to eat. She wanted to make sure others were served first, even if that left her with table scraps. She was always quick with an offer to help, whether that meant making someone a meal or even mowing someone’s lawn.

Mark told Craig he had spent years looking up to the businessman, wanting to be like him. But now, more than business success, he wanted to leave a legacy of giving and service, like Craig’s mom had. As Craig put it, “It turns out that my low-income mom was more of a hero than this millionaire.”

That conversation clarified something Craig knew deep down—“Life is about impacting other people.”

Craig’s an extremely busy guy, managing his own successful but demanding business.  I’ve always been impressed by his passion and his knack for business.  It’s no surprise that he has achieved great success at a young age.

But what’s become even more apparent since his mom’s death is his outward focus.  He takes time to get away with his wife.  He makes the effort to build special memories with his kids.  He finds time for his friends.  And he and his wife generously use their resources to benefit others, especially single moms.

I know his mom would be very proud.