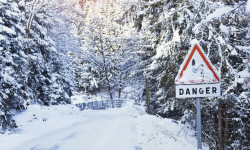 “Have I not commanded you? Be strong and courageous. Do not be terrified; do not be discouraged, for the Lord your God will be with you wherever you go.” – Joshua 1:9

During what would be my father’s final year of life, I wrote him a letter. His health was declining rapidly, and he was deeply depressed over the recent death of my mother. I wanted him to draw some measure of satisfaction from the courage with which he had lived his life, including his heroic service in World War II.

As navigator of a B-17 bomber, there were missions he flew where he saw planes ahead of his disappear into thick clouds of smoke and fragments of exploding artillery shells. He wondered how he and his crewmates could possibly survive. By the end of his tour of duty, he had flown 35 missions, many over heavily armed targets.

In my letter, I quoted from the St. Crispin’s Day speech from Shakespeare’s Henry V, in which the king exhorts his outnumbered army by telling them that all who step up to the challenge that day will be forever changed.

He that shall see this day, and live old age,

Will yearly on the vigil feast his neighbours,

And say, “To-morrow is Saint Crispian.”

Then will he strip his sleeve and show his scars,

And say, “These wounds I had on Crispian’s day.”

Old men forget; yet all shall be forgot,

But he’ll remember with advantages,

What feats he did that day.

Most of us will never know the courage required of war. Yet we all face decisions that test our courage, some of them related to money.

Carol and Tim bought a house that reminded Carol of her childhood home. It wasn’t large or luxurious, but it was on a nice street in a nice town and she thought of it as her dream home.

The mortgage required both of their incomes, which didn’t seem like a problem since they thought they could not have children. Sure enough, shortly after moving in Carol got pregnant. She felt a strong call to stay home full-time, but they couldn’t make it work on just one income. For five years they wrestled with the tension of having enough money for their mortgage, but frustratingly little time for their daughter. Finally, they decided to sell their home and buy one that required just one income.

To many, it probably looked like a step backwards. Their new street wasn’t as nice, and neither was their new town. But by bringing their financial situation in line with their highest commitments, they took a difficult, disruptive, heroic step forward.

What financial decisions are you wrestling with? Is there a bold, counter-cultural step you’re considering in order to get your finances straight? Is there a different line of work that keeps coming to mind in the quiet of the night?

Our culture calls us toward comfort, but God often calls us toward choices that rock our world and require great courage. Just contemplating those choices will bring out the mockers and the doubters. Years from now, though, it’s the courageous decisions we made that we’ll remember “with advantages.”