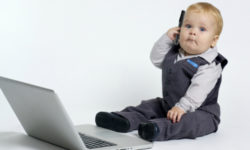 The decision of when to allow a child to get a cell phone comes with financial ramifications, and much, much more.

How many kids have cell phones?

Deciding what’s best for your family

This is a somewhat contentious issue. Parents who let their kids get a cell phone at the young end of the age spectrum can easily feel judged by those who say it’s best to wait. So, how do you decide?

When we need a way to get in touch. When kids get involved in more after-school activities, that may mean it’s time for a cell phone.

When they demonstrate responsibility. Cell phones can be expensive, so kids should have a proven track record of taking care of and not losing their things before being allowed to have a cell phone.

Who should own and pay for a child’s cell phone?

I believe a child should pay a portion of the cost, but not all, at least not at first. Since there are benefits to parents when their children have a cell phone, it makes sense for parents to pay a portion as well.

Parent Steven Nash was quoted in a Kiplinger.com article, describing the arrangement he and his wife worked out with their 12-year-old daughter. They purchased a phone and drew up a contract:

The phone is a spare family phone, and not my daughter’s property. The texting option is disabled. If she wants to use the phone, she has to lease it (out of her allowance) for $4 per month. If she goes over a set amount of minutes per month, she owes me 25 cents for each. If the phone is lost, stolen or broken, that is it (she had the option to pay for insurance but declined). Her mother and I retain the option to retrieve and analyze the phone at any time.

Dave Briggs, author of the highly regarded DVD-based course, Raising Financially Freed-Up Kids, agrees that parents should maintain ownership of the phone: “The kids have to use it wisely enough to prove they deserve to use ‘mom and dad’s cell phone.'”

What Restrictions Should Be In Place?

Today’s cell phones can do much more than make and receive phone calls. So, which features should a parent allow?

Texting. According to the Pew Research Center, nearly 90 percent of teen cell phone users send text messages; one in three sends more than 100 text messages a day. Girls are more frequent users of all cell phone features than boys.

Just 14 percent of 7th to 12th graders say their parents restrict the number of texts they can send. Teens of parents who restrict their use of texting are less likely to report regretting a text they sent, sending sexually suggestive images, or being passengers in cars where the driver texted behind the wheel.

Internet Access. I can’t think of any reason to give a child access to the Internet via a cell phone. It provides access to inappropriate content and is an unnecessary expense. Plus, with Kaiser Family Foundation research showing that kids are consuming seven and a half hours of media a day, they clearly don’t need another media portal. Kaiser also noted that kids who are heavy consumers of media earn poorer grades than those who are light users of media.

Where the phone is kept. I would not allow kids to keep a phone in their bedroom. At the end of the evening, it should be left in a public place such as the kitchen, where it can charge overnight, and where the kids know we have access to it and that we will be checking it from time to time.

So, what’s the right age?

When our oldest was just starting elementary school, my wife, Jude, and I thought we’d probably allow our kids to have a cell phone when they hit junior high school. But our oldest is now entering 7th grade and he doesn’t have a phone yet, nor is he asking for one. So, we’re holding off for now.

Here are two overarching principles we plan to follow.

First, we will use the “funnel approach” we learned about when we began the parenting journey (thank you, Keith and Cag!). The idea is that when kids are young, the funnel is tight. We make most of the decisions for them. As they get older and demonstrate good decision-making and responsibility, the funnel starts to widen. Applied to cell phones, that means when they first get one, it will come with many restrictions. As they demonstrate responsible use, they will gain more freedom.

I’d love to hear from other parents. What’s the right age for a kid to have his or her own cell phone and why? Who should pay? What restrictions are warranted? And what phones and service providers do you recommend?

I am very excited about the launch of my brand new Money. Purpose. Joy. small group resource. To watch the first session and order, click here.

4 Responses to When Should You Let Your Kids Get a Cell Phone?