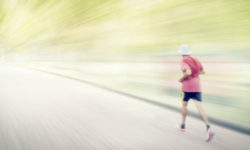 I didn’t want to run the other day. I was dead tired. Just couldn’t sleep the night before. But I went anyway.

I didn’t set any speed records—that’s for sure. But I went. And I ran the full distance I intended to run.

It was as if I had no choice. A mysterious force seemed to carry me out the door, push me down the sidewalk, and keep me going until the run was done.

The power of unbalanced forces

I love the terminology from Sir Isaac Newton’s Laws of Motion. He said an object at rest will stay at rest unless acted upon by an unbalanced force.

I didn’t do well enough in science to understand what Newton was really talking about. However, “unbalanced” is a great way to describe four forces that help get us moving toward our goals: commitment, accountability, small wins, and deciding to not stop.

There’s huge power in making a commitment – deciding to go for something in the face of fatigue, the call of the couch, and the dime-a-dozen doubters who nip at our dreams.

“Until one is committed, there is hesitancy, the chance to draw back, always ineffectiveness. Concerning all acts of initiative (and creation), there is one elementary truth the ignorance of which kills countless ideas and splendid plans: that the moment one definitely commits oneself, then providence moves too. A whole stream of events issues from the decision, raising in one’s favor all manner of unforeseen incidents, meetings and material assistance, which no man could have dreamt would have come his way. I learned a deep respect for one of Goethe’s couplets: ‘Whatever you can do or dream you can, begin it. Boldness has genius, power and magic in it!'”

Murray climbed some of the world’s tallest mountains and wrote several now-classic books on the subject. He wrote Mountaineering in Scotland on a roll of toilet paper while in prison during World War II. When his captors confiscated it, he wrote the book again.

Clearly, Murray was an oddball. He was committed.

A few years back, my wife, Jude, and I ran our first half-marathon. I had never run that far before. Because we have young kids, we were only able to run together once during our 13 weeks of training. Still, she pushed me out of bed when I didn’t want to go. I bribed her with breakfast when she didn’t want to go. It made a huge difference.

Pursuing a goal with someone else is the ultimate form of accountability. But just mustering the courage to tell someone about your crazy plans will help a lot.

Who else knows what you’re pursuing? If no one knows, call a trusted friend today and tell him or her. Ask for their prayers and encouragement. Invite them to ask you about your progress from time to time. You’ll be amazed at what a difference it makes.

It doesn’t matter whether I’m feeling energized or tired, there always comes a time during a run when I want to quit. The road ahead seems too long; progress seems to come too slow. That’s when the power of small wins is especially helpful.

I pick a landmark up ahead – maybe a house or a streetlight. I look at it for a few strides and then I look down for 10 or 20 strides. By the time I look up again, I can see that I actually have moved forward and that’s encouraging. After I pass each landmark, I find a new one.

It’s important to set sub-goals when going for a financial goal as well. Maybe you’ve run the numbers to see how much faster you’ll dump your debts if you throw an extra $50 or $75 at them each month. Every time you hit that sub-goal, you’re making tangible progress.

Deciding to not stop

Recently, someone asked me about the idea of taking an occasional month off from whatever you’re doing to pursue a financial goal in order to celebrate some of the wins along the way. It’s a common idea and, without thinking about it enough, I said it made sense. I wish I hadn’t said that.

I don’t think you should stop. Not until you accomplish the goal you’re pursuing. The feeling of accomplishment from achieving each sub-goal is celebration enough.

When we lived in the Chicago area, there was a train track on my running route. For a while, whenever I’d approach that train track, I’d hope for a train. I thought it would feel good to stop for a few minutes and catch my breath. But what I quickly discovered is it’s less painful to keep going (assuming there’s no train coming!). Stopping kills momentum. Starting again is tough.

So, hold off on any early momentum-stopping celebrations. Wait for the big win. And then make sure you have another goal in mind.

May the unbalanced forces be with you

What goals are you going for? Have you made a commitment? Do you have an accountability partner? Have you broken the goal down into a series of small wins? Have you decided to not stop?

If you have, rest assured, you’re a bit odd. Some might say you’re downright unbalanced. And I’m betting on you to get to where you’re going.

What else have you found helpful in building and maintaining momentum?

If you found this article helpful, encouraging, or otherwise worth the time to read, why not pass it along to someone else by forwarding a link? Extra points if you encourage them to subscribe. Twice a week, they’ll receive ideas and encouragement for using money well.