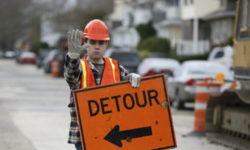 Last spring, my good friend, Mark, was experiencing back pain so intense that he decided to do something radical: He went to a doctor.

He thought it might be a badly pulled muscle, or possibly kidney stones. At first, his doctor suspected kidney stones as well.

It had attacked his spine so severely that a surgeon told him stepping off a curb in the wrong way could break his back and leave him paralyzed. He needed immediate surgery.

That was successful. However, what would normally be a six-month recovery period needed to be compressed into two in order to start chemotherapy as soon as possible.

Five months of chemo, with all of its usual side effects, culminated in a stem cell transplant that left him extremely weak and highly vulnerable to infection.

Today, miraculously, he’s almost back to feeling as healthy as he used to feel.

If something could go right…

Looking back on the past 18 months, Mark said it all seems surreal. One minute, he was making plans for the weekend. The next thing he knew, he was in a yearlong fight for his life.

Still, as he put it, after the shock of the diagnosis, “everything that could go right did go right.”

Medically, that meant the cancer was caught before it could have paralyzed him. It also meant he had ready access to world-class medical care. He lives near the Stanford Medical Center, which is a leading provider of stem cell transplants.

Financially, that meant there was no disruption in his income, even though he missed over nine months of work.

His home state of California is one of just five that requires employers to provide short-term disability benefits. But it only kicks in after all personal days have been used up. Then it covers just 60% of salary, and it only lasts for six months.

Incredibly, that combination of benefits meant my friend received full pay during all of the time he was away from work. Without those benefits, he said his medical crisis surely would have been compounded by “a major financial crisis.”

Mark’s experience was a very big deal to me. His life was threatened, and of course, I didn’t want to lose him. We’ve known each other for more than 25 years, and he’s one of my closest friends.

His ordeal also made me re-evaluate how well my family would be protected should something similar happen to me.

I’ve written about disability insurance before, but the subject became much more real through my friend’s experience.

What about you? Have you thoroughly considered how your household bills would be covered if you suddenly couldn’t work?

Take a few minutes to download and work through the Disability Checklist I developed with brightpeak financial. There are some quiz questions and some information to gather. It’ll help you better understand this issue and find out how well protected you are.

Note: This post is part of a month-long disability insurance awareness building effort that is sponsored by brightpeak financial. Read more about my partnership with brightpeak on my Disclaimer page.

2 Responses to A Very Sudden Change of Plans