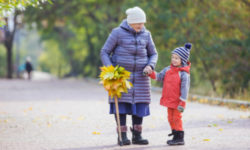 Writer Fulton Oursler had vivid memories of an old woman named Anna who helped care for him as a child. When she sat down to eat she would say, “Much obliged, dear Lord, for my vittles.”

Oursler wondered why she thanked God since she would get the food regardless of whether she gave thanks or not.

“It makes everything taste better to be thankful,” Anna said. “You know, it’s a game an old preacher taught me to play. It’s about looking for things to be thankful for. Like one day I was walking to the store to buy a loaf of bread. I look in all the windows. There are so many pretty clothes.”

“But Anna, you can’t afford to buy any of them!” he interjected.

“Oh, I know, but I can play dolls with them. I can imagine your mom and sister all dressed up in them and I’m thankful. Much obliged, dear Lord, for playing in an old lady’s mind.”

Many years later, when Anna was dying, Oursler remembered standing by her bedside. Deep in pain, her old hands were knotted together in a desperate clutch. “Poor old woman,” he thought. “What had she to be thankful for now?” Just then, she opened her eyes and looked at him and said, “Much obliged, dear Lord, for such fine friends.”

According to the Reverend Dr. John Westerhoff, who tells Anna’s story in a booklet called “Grateful and Generous Hearts,” we can all learn much from Anna, who viewed life as a gift. “Taking nothing for granted, demanding nothing as her due, she recognized that we come into this world with nothing, we go out with nothing, and in between we are given all we have.”

While the busyness and responsibilities of our lives can easily obstruct our view, none of us has to look very far to find a reason to be thankful. Living with an attitude of thankfulness is honoring to God, good for the soul, and infectious.

What are you thankful for? Try making a list of 10 things—the first 10 that come to mind. Then give Anna’s prayer a try: “Much obliged, dear Lord. Much Obliged.”

Be cheerful no matter what; pray all the time; thank God no matter what happens. This is the way God wants you who belong to Christ Jesus to live. – 1 Thessalonians 5:18 (MSG)