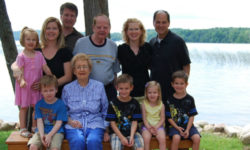 My father-in-law passed away last week.

One of my favorite stories my wife tells is of a time when she was a little girl and they were driving somewhere. She noticed a sign for a bowling alley and asked her dad what bowling was. He didn’t just explain it to her; he turned the car around and took her bowling.

If you only knew my in-laws casually, one of their characteristics that would have stood out to you was their frugality. They reused whatever could be reused—sandwich bags, plastic forks and knives from restaurants, and more. They spent very little on themselves, living in a modest home, driving modest cars, and wearing modest clothes.

But I’ve had the privilege of knowing them well, and I can tell you that what overshadowed their frugality was their generosity.

I first experienced it when I decided to ask their daughter to marry me and tried to ask Ken for his blessing. I lived about five hours from them, so I called, said I needed to be in their town that weekend, and wondered if I could stop by for a few minutes while I was there. Ken seemed a bit surprised, but agreed. About 10 minutes later, he called back, saying he was pretty sure he knew what I was up to and he’d be happy to have whatever conversation I had in mind over the phone if it would save me the drive.

About 10 years ago, we started a tradition of renting a lake home for a week every summer with my in-laws as well as one of my wife’s brothers and his family. It’s something we all look forward to every year—the simple pleasures of sharing meals together, swimming, and enjoying good conversation. Ken taught our kids how to fish on those trips.

In more recent years, Ken and Barb participated in the activities less, but still seemed to enjoy watching their grandkids play in the water.

I’m not sure how this part of the tradition started, but fairly quickly my in-laws got in the habit of subsidizing those trips. In fact, I don’t think we ever had to pay our entire fair share.

It was a priority for them to invest in time with family and making memories together. I think they wanted to make sure money never prevented anyone from participating.

When we visited them a couple of weeks ago, Ken was in the hospital, and he was agitated about many things—the room, the bed, the pillows. Still, in the midst of his discomfort, he was mindful that we had already booked this year’s lake house, and his instinct toward generosity was stronger than ever.

He asked my wife with great urgency one day to see to it that money was withdrawn from a separate savings account he maintained to pay for all of this year’s vacation. He knew he wouldn’t be able to go, but he was intent on making sure the rest of us did, and he wanted the entire thing to be his treat.

I found that fascinating. I’ve researched the topic of generosity a lot over the years, and I’ve written and taught workshops about it many times. I always make the point that generosity is an important key to a satisfying life. We were made in God’s image and He is endlessly generous. That means generosity is an essential part of our spiritual DNA. To live generously is to live in concert with our design.

But I saw the reality of that in a fresh way through Ken. There was something very moving about what an overwhelming priority it was for him in his last days to express his generosity in one more powerful way.

So we’ll go to our rented lake house this summer. While we usually rent different homes each year, this year we’re going back to one we’ve rented before.

It’ll be enjoyable, and it’ll be sad. It’ll be familiar, and it won’t be the same.

I’m thankful to have had such a fine father-in-law. I’ll remember him for his many wonderful qualities, not the least of which was his generosity.

That’ll forever be an important part of our family story—a legacy to remember and aspire to.

10 Responses to A Tribute to a Generous Man