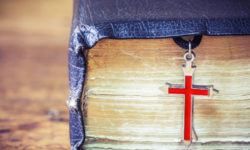 A few months ago, I asked readers of this blog to send me positive financial stories. The first note I received in response was from John, a friend with whom I had served in stewardship ministry more than 10 years ago. He wrote about his gratitude for how radically his life has been altered by his relationship with Christ and by a growing understanding of what it means to be a good steward of all that God provides. The path he and his wife have been on can best be described as one of whole-life stewardship. I think you’ll find their story moving and encouraging.

Live long enough and you’re bound to experience some great joys—and also some devastating pain. That’s certainly been true for John and Joan, although most would agree that they’ve had far more than their fair share of pain.

Their journey has deepened their faith, profoundly shaped their priorities, and helped them loosen their grip on the things of this world.

John is the first to admit that when he and Joan got married they weren’t exactly “equally yoked,” nor was he the most generous guy on the block.

He was raised Catholic and “never took matters of faith very seriously.” As for generosity, his habits ran toward $5 or $10 weekly offerings, even after beginning his career in a lucrative field.

“I started out a young engineer with only a passing involvement with church, well on my way to becoming another statistic of American consumerism and another rich young ruler” (Mark 10:17-27).

Joan was raised Presbyterian, became a committed Christ-follower in high school, and has been active in her faith ever since.

They were both naturally wired as savers—products of parents that valued frugality, mostly by necessity.

“They clung tightly to what they had, and they didn’t have much,” Joan said of her parents. “As a farm family, you don’t know how things are going to be. We didn’t go on vacation, didn’t go out to eat. My parents saved everything. They cut open the toothpaste tube, straightened used nails, and scraped out the mayo jar.”

Making generosity a priority in their marriage was Joan’s idea. She knew from a young age that the tight hold her parents had on money was a habit she wanted to break. Her study of scripture gave her a desire to tithe, a concept that John said, “didn’t even occur to me.”

Things began to change for John after they started going to Willow Creek Community Church in suburban Chicago. A sermon on how to know whether you’re a Christian spurred John to firm up his faith.

Another influential message came from a Haitian missionary, who talked about the hardship faced by the many homeless families in the Caribbean country. John had $3,000 of savings earmarked for new stereo speakers, but when he heard that such an amount could provide an entire home for a family, he decided there and then to give it all away.

“I already had a nice stereo setup,” John explained. “I could not see spending $3,000 for another upgrade when for the same money I could provide a family with an entire home.”

When John “went on his faith journey,” as Joan puts it, they already had one child. Eventually they would have three more.

The intersection of faith and finance

Before long, John got involved in Willow Creek’s stewardship ministry, Good $ense, and met its director, Dick Towner. “Under Dick’s teaching, I found out that God owns it all and I needed to be a steward of all He provides.”

He was also struck by a concept Dick described as “driving your stake lifestyle-wise.” In essence, that’s about setting a financial finish line, deciding how much is enough.

“It’s such a treadmill the other way,” John realized. “As soon as you take two steps, you see the next two steps you want to take. Unless you have a goal and know the finish line, you’re going to be miserable.”

That idea helped John and Joan decide to consciously avoid the treadmill of trading up to a bigger home or nicer car each time their income increased. It gave them margin and peace of mind, enabled Joan to be home with their growing family, and fueled their increasing passion for generosity—for letting go of more and more of what God had entrusted to them.

One year, when their church was in the midst of a building campaign, John felt prompted to give a tithe of their entire net worth.

“I was surprised at the number, especially since it was coming from John,” Joan said. “I was praying for many years he would become a Christian, and now here he was displaying phenomenal generosity.” She was completely on board.

“I was hoping I’d get a little more push-back,” John joked.

“Part of it was all the years I hadn’t been tithing,” he explained with a wry smile. “I thought I should get my generosity account straightened out.”

Eventually, John and Joan’s growing conviction to hold the things of this world with a loose grip made its way into their parenting. A book they read called “Just Courage” by Gary Haugen helped change their hopes for their kids.

“He talked about how common it is for parents to pray for their kids to be happy, healthy, and safe,” Joan said. “He challenged readers that it would be more powerful if we prayed quite differently for our kids. So I started praying they would be brave, courageous and dangerous young men and women of God.”

On a summer day in 2009, in the midst of preparations for a family vacation later in the week, John and Joan decided to take their oldest son, Will, to the doctor. It was just a precaution. The athletic 16-year-old had been feeling unusually lethargic and they thought he might have mono.

But it wasn’t mono; it was cancer.

Joan remembers sitting in her car with Will after the diagnosis, trying to process the devastating news and wondering how to begin navigating this unwelcome and unfamiliar journey. She thought of a Willow Creek pastor whose daughter was being treated for cancer and called him.

“I asked him to think back to day one of their journey. What would you have wanted to know? What should we know? And he said, ‘That Will is God’s son first.’ I guess I thought that’s a pretty crummy answer. What else you got? I thought I’d hear about a dream team doctor, or some other practical advice. But there was something in those words that reminded me what faith really is, what trust really is. Those aren’t just words. Those kids aren’t really ours. They’re God’s first.”

As they began treatments, it became clear that the open-handed way Joan and John lived had rubbed off on their kids. At a time when many people would draw inward, Will’s focus was outward. In their regular trips to a hospital in Chicago from the suburbs, they encountered many homeless people, which gave Will the chance to do something he learned from a book about homelessness he had read called “Under the Overpass.”

One day as they were leaving the hospital, Will told his parents he had to run an errand. When he came back, he had $20 of McDonald’s gift cards, which he gave to homeless people on subsequent trips.

They kept running into one particular homeless man named Roger and struck up a friendship.

Initially, Will’s prognosis was fairly good. However, chemotherapy took a toll on his immune system, and a year later he died from an infection.

“Little did I know God would be asking us to let go of even more of what he had given us,” Joan said.

At the hospital where Will was treated, John and Joan saw many families torn apart by the emotional and financial stress of their children’s illnesses. But that was not their experience. Years of investing in their relationships with God, each other, their kids, and their community of friends saw them through.

While Joan and John experienced all the emotions that go with deep grief—anger, sadness, doubting of faith, gratitude—they drew strength from God along the way. Through Will’s death, they saw a whole new dimension of the value they had established as a family years earlier—to hold the things of this world with a loose grip.

“When the greatest treasure you’ve been entrusted with is suddenly gone, you begin to understand more of what it means to not store up treasures on earth,” Joan said. “We’ve learned through loss that everything on this side of heaven is temporary. Everything. Our perspective changed, our faith got painfully stretched, and our focus shifted quickly away from goals of achieving and acquiring more treasures. Our hands opened up.”

Today, Joan, John and their kids still grieve the loss of Will, while also seeing his life as something to steward, his memory as something to enjoy. One way they do that is with an annual water balloon fight that usually attracts several hundred participants. It isn’t a fundraiser; it’s just a fun tradition—the continuation of an event organized by one of Will’s teachers to cheer him up the summer of his diagnosis.

“It’s a way Will’s story gets told,” John said, “and it celebrates the way people have come along side us. Grief is about being sad. This is just about being a kid again and doing something silly and joyful.”

Whenever Joan and John go downtown, they look for Roger to see how they can help and to be an encouragement. That’s another way they’re “stewarding Will’s life forward,” Joan said.

As they have been for many years, Joan and John are heavily involved in ministry. Joan teaches a spiritual formation class at Willow Creek, facilitates guided solitude retreats, and leads Listen to My Life workshops that help people understand how their life story is part of God’s bigger story. John still works as an engineer where he mentors younger colleagues, and he volunteers with Willow Creek’s stewardship ministry.

With one child in high school and two in college, they’re spending more and more time envisioning what life might look like as empty nesters, and how they might serve in ministry together.

They’re praying about that, listening for God’s direction, and as you might expect, holding the possibilities with open hands.

3 Responses to Living an Open-Handed Life of Faith: One Couple’s Remarkable Journey of Letting Go