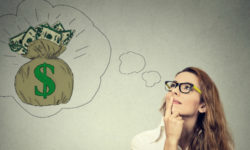 Early in my journey of learning about money, I noticed a very odd disconnect.

On the one hand, it was obvious that there’s a ton of personal finance advice readily available. Search on any financial question and within seconds you can find answers.

And yet, lots of people struggle with money.

Why is that? With so much guidance so close at hand, why is successful money management so difficult for so many?

I believe it’s because too many people aren’t clear about the purpose of their lives. They’re living reactive lives, bouncing from one popular message about what matters to another.

Do you know who you are?

The English writer Samuel Johnson once said, “People need to be reminded more often than they need to be instructed.”

Oh we need instruction, but all the instruction in the world won’t do us any good if we’re not clear about who we are and what really matters.

Our culture would have us believe we’re consumers. It sounds harmless enough, right? But have you ever looked up the definition? To consume means to use up, devour, spend wastefully.

How’s that working out for us?

The word first came into popular use during the Industrial Revolution, the period roughly between 1880 and 1920 that built the foundation of today’s consumer culture.

Our society shifted from agriculture to industry. People went from self-sufficient to income dependent, from making things to buying things. With so many goods spilling off assembly lines, businesses needed people to use stuff up. To paraphrase Aldous Huxley from Brave New World, “ending” (throwing stuff away) needed to replace the habit of “mending.”

To entice us to buy more and more stuff, advertising began linking products to our identity and happiness. Products became branded, and so did we. No longer were we referred to as citizens or workers. We became consumers.

From that point forward, huge sums of money have been spent in an effort to keep us from remembering who we were made to be.

What’s in a name?

Consumer is more than a word; it’s a worldview. If I’m a consumer, I’m the most important person in the world. Life is all about me – my pleasure, my comfort, my happiness.

If I’m a consumer, I believe happiness is found in money and stuff.

And if I’m a consumer, I see life as a competition. I notice what others around me have and I’m happiest when I have more.

People who study happiness say this is the path that leads in the exact opposite direction of where we’d all like to go. It’s like trying to get to New York from Chicago and getting on a westbound train.

They say happiness is found in living for something bigger than ourselves, loving people instead of stuff, and living a life of contribution instead of competition.

Remembering who we are

The good news is that we were not meant to be consumers. The Bible doesn’t say that on the sixth day God made consumers who would use up and waste all that He made on the previous five days. It says He made man and woman in His image.

Financially, the Bible describes us as stewards, or managers.

But I think a lot of people misunderstand that. The word seems heavy, like a burden. It’s as if they’ve been given managerial responsibility over some stuff and misheard the instructions as: “Whatever you do, don’t break or lose any of this stuff.”

Those aren’t the instructions we’ve been given at all.

In the Parable of the Talents, a wealthy man entrusts three servants with his stuff, goes on a long journey, and then returns to see how they did. One servant got the instructions wrong. He hid what was entrusted to him out of fear and then returned it to his master. He didn’t lose or break any of it, but he didn’t do anything productive with it either. For his efforts, or lack thereof, he received a harsh rebuke.

The other two servants were different. They turned what had been entrusted to them into something more. For their efforts, they received strong words of affirmation. And then the master entrusted them with more to manage.

Of course, the master represents God; the servants represent us.

The art and joy of being ourselves

We weren’t designed to use stuff up. We were designed to create, build, and make something more of what has been entrusted to us.

What is that something more?

The Bible says we were designed to live not just for something more, but for someone more – God. So, the first purpose of money is to use it in ways that glorify God.

The Bible says the second most important priority in life is to love others. It never says that money or things are inherently bad. It just teaches us not to love money or things, but to love people. So, the second purpose of money is to use it in ways that strengthen our relationships with others.

And the Bible says we’ve all been given certain talents and passions in order to make a difference with our lives. So, the third purpose of money is to use it in ways that enable us to make our unique meaningful contribution to the world.

Those are the three overarching purposes of money: Use it to love God, love others, and make a difference with our lives. They are the guiding principles for how we are to use money—the path toward a meaningful, successful experience with money.

Next week, we’ll look at how these purposes translate into a very specific set of financial priorities.

If you were to honestly evaluate your current use of money, how well does it line up with these three purposes?

Interested in more ideas and encouragement for using money well? If you haven’t done so already, sign up for a free subscription to this blog.

2 Responses to The Purpose of Money