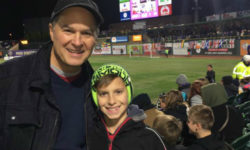 In our household, I’m the chief of the sleep police. I want our kids waking up in the morning rested and ready for their day.

But this past Monday night, my 11-year-old was up past midnight, and it’s all my fault. Stranger still, if I had the chance to do things differently, I wouldn’t change a thing.

You see, he loves soccer and Louisville’s United Soccer League team, Louisville City, made it to the national championship. The game was here in Louisville Monday night with a 9:00 start.

Right after the team made it to the finals, I checked on ticket availability, found seats in the fourth row, and made a spontaneous decision to buy some. In fact, I bought four, figuring we’d invite one of my son’s friends and his friend’s dad.

This was all fairly unusual behavior for me. Like I said, I’m intent on making sure our kids get enough sleep. And I’m also intent on making sure our monthly budget balances. While the tickets were a reasonable $25 each, we had just been to the team’s last game—the one that put them in the championship—10 days earlier. The cost of those two games exceeded our monthly entertainment budget.

For both of those reasons—the late start on a school night and the cost—I hesitated for a minute before buying the tickets. But I’m so glad I went ahead. It was an amazing game that Louisville City won with just a couple of minutes left on the clock. The look of joy my son and his friend wore pretty much all night was worth every penny, and every yawn the next day. He’s probably thanked me 20 times since then.

To some, this may sound like a horrible example for a personal finance writer (and parent!) to set. But here’s the thing: This is exactly why using a budget, and making conscious decisions about how to prioritize the use of money, and not financing cars, and making sure our home doesn’t own us, and on and on—this is exactly why all of that makes so much sense.

When I look back on my life, I’m sure I won’t have vivid, exciting memories of figuring out each year’s budget. I won’t derive a deep sense of satisfaction from having made our entertainment budget balance each month. But by figuring out each year’s budget, and by learning how to make some adjustments as the year goes on, we will have gained the margin to say yes to the things I will remember and cherish.

How has practical, proactive money management enabled you to be a little impractical sometimes, and what great memories have come about as a result?

2 Responses to The Priceless Joy of a Little Impracticality