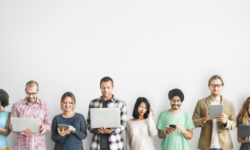 I’m sure it isn’t news to you that there’s a global epidemic of obesity. Or that out of 195 countries, the problem is growing fastest in the U.S.

What’s to blame? In part, it’s our “food environment,” according to Andy Bellatti, cofounder of Dieticians for Professional Integrity. “Unhealthy foods are cheaper and they’re everywhere,” he said. “If you go to any store, you can buy a candy bar at the checkout but not a piece of fruit.”

The marketing lists we’re on. Take a look at the last 20 email messages you received. How many were promotions? Companies such as Groupon can be helpful in saving money, but they can also lead to financial death by discount if they tempt you to overspend.

What to do? Always remember, a deal isn’t a deal unless it’s a discount on something you were going to buy anyway. So, if the number of promotional emails you receive is prompting you to spend more than you should, unsubscribe from most, if not all, of those marketers’ lists.

The time we spend on social media. Regularly taking in the highlight reels of our friends’ lives can be hazardous to our financial health, according to Sarah Fallaw. She’s the founder of DataPoints, a company that studies the affluent, and also the daughter of the late Thomas Stanley, author of one of the best personal finance books I’ve read, The Millionaire Next Door. She told MarketWatch that “social indifference” is an important key to building wealth.

“…the research we’re doing demonstrates that those who ignore trends have higher net worth, regardless of their age, income and percentage of wealth that they inherited. Building wealth means ignoring what others are doing.”

What to do? Limit the time you spend on social media. Or set an example for using social media more constructively. Instead of mostly posting pictures from your family’s best moments, ask questions to foster dialogue and community.

The time we spend on other media. Boston College Sociologist Julie Schor has found that the more TV people watch, the less they save. And it isn’t just due to the impact of advertising messages. It’s exposure to the unrealistically expensive lifestyles of the people featured in the programs.

What to do? Take your cable package down a notch so you have less reason to watch, or make it less convenient to watch by moving your television to a less prominent part of your house. One of the best decisions we made when we moved into our current house was putting our only TV in the basement.

Positive financial role models. Some of the early friends I made after I became a Christian and started turning my financial life around had—and continue to have—a big impact on me (thanks Tom and Rachel, Rob and Amy, and Dick and Sibyl). They are people who live well within their means. The people we spend time with shape us in ways we don’t fully appreciate—either positively or negatively.

What to do? Start to notice people who are living differently—keeping cars longer than most people do; enjoying simpler, less expensive activities; and generally living more modestly. Get together with them and let them know that in a world of overspending they stand out for keeping things real. They probably won’t mind talking about it.

(See The Pull of the Neighborhood — Four Ways to Keep Your Financial Footing.)

Time in God’s Word. This is the single most proactive thing we can do to travel each day through our consumer culture with our sanity and financial solvency intact.

Take to heart the apostle Paul’s warning not to worship and serve created things instead of the Creator (Romans 1:25). Remember Jesus’ exhortation that “life does not consist in an abundance of possessions” (Luke 12:15). And keep in mind that it’s the better part of wisdom to maintain a reserve (Proverbs 21:20).

Memorizing Scripture creates something of an internal gyroscope, which helps us stay true to our values as we get bombarded by messages aimed at pulling us off course.

What other steps have you taken in order to shape your financial environment in constructive ways?

A personal note: Some readers have asked about my mother-in-law, who I mentioned last week was on hospice care. She died this past weekend surrounded by her loving family. I was privileged to know her. She leaves behind many wonderful memories and a legacy of loving her family well.

4 Responses to How Healthy Is Your Financial Environment?