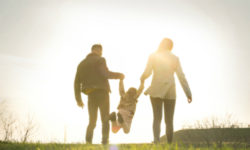 If you want to know the secrets to happiness, you’ll find plenty of suggestions online. But there are quite a few serious studies on the topic as well, and one of the most authoritative is the Harvard Study of Adult Development.

Some 80 years ago, the school started tracking and analyzing the lives of 724 men (women weren’t included because many of the participants were Harvard students and the school was all-male when the study began). Researchers were hoping to discover what makes people healthy and happy as they go through life. It may be the longest study of adult life ever. Only 19 of the original participants are still alive.

The study’s overall finding is incredibly simple. In a Ted Talk, Robert Waldinger, the current director, said it all boils down to developing and maintaining good relationships.

“People who are more socially connected to family, friends, and community are happier, healthier, and they live longer. It’s not just the number of friends you have, but it’s the quality of your close relationships that matters.”

None of this is new news. When Jesus was asked what matters most he said it’s all about relationships—loving God and loving others. Still, it’s noteworthy that such a long-running secular study of health and happiness would focus on the importance of relationships as well.

What does this have to do with money? A lot, since money is often a source of stress and strife between husbands and wives. It points us to a worthy question: How can we use money in ways that foster stronger relationships with our spouses, our kids, and others? Here are a few suggestions.

Get on the same page. If you want to relate well—financially and otherwise—to that mysterious person you call your spouse, one of the best approaches is to understand his or her temperament, as well as your own. A great starting point is the four-temperament classification system: Choleric, Sanguine, Melancholy, and Phlegmatic.

On the Resources page of my site, you’ll find a simple tool for identifying your temperament and understanding some of the financial tendencies associated with it. It’ll give you invaluable insights into each temperament’s financial strengths and weaknesses.

Spend wisely. The other day, my wife Jude mentioned that we only have five more spring breaks before our oldest will be in college. Five more summers. Four more… We had to stop ourselves. It was a stunning reality that made us both sad.

I deeply enjoy the rhythm of day-to-day family life, and I’m thankful for a job that enables me to be home for dinner with my family most of the time. I’m also thankful that Jude and I are on the same page in choosing to keep our vehicles a long time so that we have money available for family trips. Some of my fondest memories are of our family vacations.

It’s easy to overspend on a house or vehicles or other stuff, only to find that we don’t have enough for the experiences we will cherish long after all that stuff loses its appeal.

Invest in people outside your family. I love the story of Jason that Donald Miller tells in his book, A Million Miles in a Thousand Years. Jason’s daughter had started dating a guy who was bad news, which made Jason realize he hadn’t drawn his daughter into a compelling enough story. His spontaneous decision to raise a crazy amount of money to build an orphanage didn’t go over very well with his wife or daughter, at least, not at first. But eventually it became something they all wanted to do, and taking on something so big—so beyond themselves—was transformative.

What are some of the key ways your use of money has been purposely designed around relationships? Or, in what ways do you sense that some changes may be in order?

4 Responses to The Happiest Uses of Money