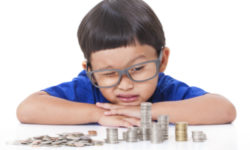 Recently, I wrote an article describing The Absolute Best Way to Teach Kids About Money. It centered on an idea I read about in Mary Hunt’s excellent book, Raising Financially Confident Kids, in which you give kids responsibility for managing financial categories you used to manage for them (like clothing). In this follow up, I want to highlight how one family has expanded on that idea.

I first met Rob Bernabé when I interviewed him about his excellent book, Mind Your Own Mortgage (highly recommended if you are planning to buy a house anytime soon). Rob, too, read Mary Hunt’s book and it prompted his wife and him to make some changes in how they’re teaching their kids about money.

They had been giving each of their kids, nine-year-old Matt and seven-year-old Macey, an allowance of $30 per month. From day one, they taught their kids to give 10% and save 10%, leaving them with $24 for spending.

Now the Bernabés wanted to up their game. They wanted to incorporate the main idea Mary talks about in her book, but they also wanted to teach them about taxes while simultaneously building in some incentives to give and save even more.

So, they called a family meeting and announced that the kids were getting a raise to $40 per month. However, before they had time to get too excited about that, they were told it came with an important caveat.

Of course, they still would be expected to give and save 10%—now $4 to each category. But they’d also be responsible for paying a “family tax” of $8, which would bring them back to the $24 of spending money they used to have.

At first, the Bernabés tried to soften the blow by offering to match whatever extra amount the kids gave or saved. If they chose to put their entire $24 in savings, for example, their parents would put another $24 in savings.

“But Daddy,” Macey complained, “then we won’t have any money left”.

“But we can’t spend that money, Daddy.”

“Exactly the point, my Dear.”

Neither child felt motivated to give or save any more than 10%. So, The Bernabés came up with another idea. Just as adults get a tax break for giving and for certain types of savings, so would the Bernabé kids. Rob picks up the story from there.

“Utter silence—and then: ‘Please give me back my money, Dad.’”

“Matt, you’re telling me you would rather have $48 dollars in your hand instead of $42, plus $16 in your Piggy Bank? Does that makes sense to you, son?”

“Again silence. And then it clicked.”

Since installing the system, both of the Bernabé kids have increased their giving and saving.

“They also complain about the tax,” Rob said, “and wonder what they can do to stop the family government from taking so much of their money. The only outs they have are to give and save (or join the Tea Party!).”

The Bernabés are intentional about using dollar bills in managing their allowance system.

“That makes the math easy,” Rob explained, “and provides a visual of just how little God asks us to give. They are learning so much about life in addition to math skills and later, Excel skills, as I’ve designed a sheet to use on the computer after they have shown they can fill in the boxes on the manual sheet I created.”

I really like how the Bernabés have been proactive in encouraging their kids to be generous, motivating them to save by using an employer match-like incentive, and introducing the hard realities of taxes at such a young age. What do you think about their system?