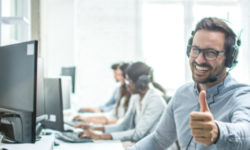 I am constantly amazed at what you can get just by asking.

At the beginning of last year, I wrote about an experience we had with our van. It needed a costly repair that seemed to be due to a manufacturing defect. Just by asking, I got not just the amount of the repair reimbursed; I got more than the cost of the repair.

More recently, I had two similar experiences in a row.

First, our home security company notified us that the quarterly amount we pay for monitoring would be going up. The amount was so little—about $11 per quarter—I was tempted just to pay it. But I decided to call the company instead.

I very politely mentioned that we’ve been long-time customers and recently received word that our monitoring fee would be going up. I simply said, “I’m wondering if there’s anything you could do for us so that our rate won’t go up.” The customer service rep asked me to hold for a couple of minutes so she could look over our account. When she came back on the line, she said she was able to make an adjustment so our rate would not go up. It took all of five minutes.

Next, we’re planning a family trip to New York City later this year. Using miles, I was able to get tickets for all five of us for free. The only catch was that we’d have to use connecting flights both ways.

I was feeling somewhat concerned about. I didn’t like that there was an element of risk. What if one of the flights was cancelled or delayed? What if we missed our connections? I didn’t want anything to go wrong.

So, I called to see how much more it would cost to change our flights to a non-stop. It was a lot, so I resigned myself to having to keep things as they were. But then I saw a notice on the airline’s web site, saying our flight times had been changed. They weren’t changed a lot, but the connection on the trip back home seemed tight, especially for a family of five.

So I called again, mentioned the changes the airline had made, and very politely asked whether anything could be done on our behalf. The customer service representative switched us to a non-stop. Even better, it left a little later in the day, which gave us more time in New York on our last day.

I was about to thank her and hang up, but I decided to ask if she could do anything for us on our outbound flight. That, too, had been changed by the airline, but we still had plenty of time to make our connection. Still, I went ahead and made the request. To my amazement, she switched us to a non-stop for that part of the trip as well. It’ll get us to New York at around 2:30 in the afternoon instead of 7:30 in the evening—again, giving us more time to enjoy the city.

I often tell our kids, it’s amazing what you can get if you just ask. The keys are to be polite and be willing to accept a “no.” Don’t get all entitled or demanding. Just make your request and see what happens. I’ve had far more positive outcomes than negative.

I hear from many people that they’re hesitant to make such requests. They just don’t feel comfortable with it. I get that. My recommendation is to practice. Make little requests. In a store, if you’re having a hard time finding something, don’t just ask what aisle it’s in. Ask someone to show you where it is. At a grocery store deli counter, ask for a sample of something. At a restaurant, if you see an empty table you like better than the one you’re about to be seated at, ask for the other one. Getting some little wins will give you the confidence to make bigger requests.

What’s been your experience with this? What have you gotten just by asking? Or, if you’re hesitant to make requests like these, why?

Profitable Ideas: How to Turn Your Clutter Into Cash, A Simple Way to Contain Lifestyle Creep, and More
Profitable Ideas: Making a Prime Membership Pay Off, You Need a ‘Near-Cation,’ and More