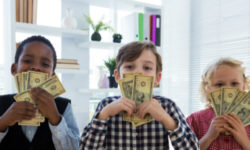 By Matt Bell on August 28, 2018 in Generosity, Investing, Teaching Kids

Wise money management is one of the most important subjects typically not taught in school. And unfortunately, where it is being taught, many of the efforts have been found to be ineffective.

The issue seems to be that such teaching is too abstract. There’s been too much lecturing and too little letting kids do real things with real money.

In our household, we continue to look for new ways to put that lesson into practice. And it seems to be paying off.

This past Sunday night, our 14-year-old wanted an update on his investment account. As I’ve written recently, all three of our kids have started following Sector Rotation, a very aggressive strategy offered by Sound Mind Investing, where I work by day.

Each of our kids had some money building up in savings that we moved to an investment account recently. When kids are especially young, I’m a strong believer in opening savings accounts for them at a local bank or credit union and actually going inside to make deposits (I know — who goes inside a bank these days?). It makes the process of saving and earning some interest real.

But as our kids have gotten older, moving things online and transitioning from saving to investing has made more and more sense.

So there we were, looking at his Schwab account online. Each of our kids have earned a remarkable 5.5% in just 3 weeks. They know Sector Rotation is an aggressive strategy that is bound to take them on a wild ride, but so far so good.

It was fascinating to me how many questions he had. As he looked at the screen, he saw lots of unfamiliar terms. “Cost basis,” “unrealized gain/loss,” “small cap.” What does it all mean? He was genuinely interested and it led to a great conversation. The important point is that if I had just tried to teach him about such concepts, he very likely would not have been interested. But because he had some of his own real money invested, he wanted to learn.

Later that same night, as I got our 10-year-old ready for bed, she handed me $100 and asked me to put it in her investment account. What kid does that? The money was mostly from three months’ worth of allowance payments.

Okay, we forgot to pay her for a while, so she got a pretty sizeable lump sum. And she got some more money for a recent birthday. I was amazed that she was so enthusiastic about investing the money instead of spending it. Apparently, she’s excited about an idea we’ve been talking about lately: Compounding returns and the importance of starting early.

It’s been deeply satisfying to see our kids truly understand some important lessons about money, and I think much of it can be credited to this idea of teaching through hands-on experiences.

We’ve seen the benefits in the spending arena as well. Mary Hunt’s book, Raising Financially Confident Kids, prompted me to give our kids their clothing budgets in cash and let them make their own decisions of how to spend it. It’s been a very effective way to teach them to make trade-offs, look for good deals, and save up for more expensive items (Read The Absolute Best Way to Teach Kids About Money.)

And we’ve seen the benefits of hands-on learning in the area of generosity. Ever since they were very young, we’ve encouraged our kids to give at least 10% of any money they receive. One of the best ways we’ve found to make giving real has been to sponsor some kids through Compassion International (World Vision offers a similar program).

One morning when our oldest was about three or four, I sprang a surprise quiz on him over breakfast, asking what are the three main things you can do with money. The previous night we had talked as a family about one of the kids we sponsor, a boy named Aziz who lives in Burkina Faso. We have his picture and we exchange letters with him. Rubbing the sleep from his eyes, our son said, “Ah, you can save it, spend it, or give it to Aziz.” I loved that answer.

A few weeks ago while walking through a city where we were vacationing, we picked up some restaurant food and took it back to our hotel room.

Without any prompting, our 12-year-old cut his hamburger in half, wrote a note on the top of the Styrofoam container promising that he hadn’t bitten off the part of the burger inside, and then asked me to take him back outside. He had noticed some homeless people earlier and wanted to give half of his hamburger to one of them. I watched as he approached an older man in a wheelchair who was asking people for money, gave him half of his dinner, and had a brief conversation.

The man was sincerely grateful. And so was I. It’s a powerfully moving experience to see young kids start to really get this whole money/stewardship thing.

4 Responses to Teaching Kids About Money By Keeping It Real