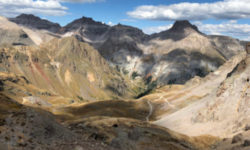 Fear finally caused me to stop. I was in Colorado, reconnecting with two long-time friends, one of whom is an experienced mountain climber. He had slowly driven us up a perilous-looking, narrow and rocky path cut along the side of a mountain. There were no guardrails to protect us from the sheer drop-off. Bouncing around in the back of his two-seat 1960s Willys Jeep, I alternated between glancing at the incredible scenery and keeping my eyes inside the Jeep to ease my fears.

After we had gone as far as his seemingly unstoppable vehicle would take us, we got out to hike. There were no paths that I could see, just my friend’s knowledge of the area, having been there before. The higher we climbed, the looser the footing became. As one who doesn’t like heights, I conquered fear after fear, but finally decided that the next steep portion was too much.

So I spent 90 minutes drinking in the view from about 12,600 feet shown in the photo above as my friends continued to climb. (The highest peak in Colorado is about 14,400 feet.)

Not all fear is bad

I’m well aware that “Do not fear” is the most common command in the Bible. But there are two sides of fear, as Donald Miller describes so well: “Fear isn’t only a guide to keep us safe; it’s also a manipulative emotion that can trick us into living a boring life.”

In other words, fear can be useful when it moves us out of harm’s way, but it can be destructive when it holds us back from doing what God calls us to do (hence, the boring—and I’d add, disobedient—life).

Fear works in similar ways with investing. The negative side of fear can drive us out of a falling market, causing us to lock in our losses and usually miss the recovery that follows.

But it can also keep us from taking more risk that we should when we set up our portfolio. Think about this: How much do you fear the possibility of a significant market downturn? What if your portfolio lost half its value over the next six months, just as the U.S. stock market did between September 12, 2008 and March 9, 2009? (Actually, it lost about 45%, but close enough.) If that strikes a paralyzing fear in your heart, an all-stock portfolio is too risky for you. There’s no shame in acknowledging that; it’s wise.

Experience counts for a lot

Throughout our time on that mountain, my friend was not the least bit afraid. When he said he saw no reason for fear, he wasn’t boasting; he was speaking from experience. And when he said he would never put us in danger, I trusted him. I was very confident that he knew what he was doing. That’s what got me as far as I went, which was much farther than I ever would have dared to go on my own. And my growing fear told me when I finally had to stop.

There are two ways to bring that type of experience into your investment portfolio. First, you may have personal experience. If you had money in the market during the Great Recession and didn’t make any panicked decisions, that tells me you were using a trustworthy investment strategy and you have the emotional fortitude to successfully navigate the next downturn.

Second, you could purchase that experience, whether by subscribing to an investment newsletter or working with an investment advisor. Chosen well, either one could provide a calm, experienced voice of reason that helps you make it through the storm.

Investors are often described as “climbing a wall of worry.” The idea is that as the market rises, so do concerns about the next significant downturn. With the current bull market now over nine years old, those concerns have only grown. So let me ask you: As an investor, are you climbing alone in unfamiliar territory? Or do you have experience—whether personal or purchased—on your side? 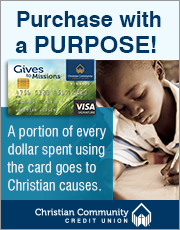