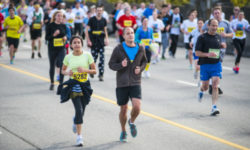 By Matt Bell on October 2, 2018 in Budgeting/Planning

I just signed up to do something I really don’t want to do, and I’d like to encourage you to do the same. Not the exact same thing I signed up for, just something you may not necessarily want to do. Let me explain.

You see, there are plenty of things I want, and I’m guessing it’s the same with you. Financially, maybe you want to get out of debt, buy a new car, earn more, or give more.

For me, what I really want right now isn’t money-related. I want to be in better shape. Oh, I work out, running three times a week. But honestly, I’m not really progressing. I’m committed enough to run, but I seem to be stuck at the same (short) distance.

Wanting to be in better shape and even doing a little something about it isn’t generating the results I want. This summer I ran a 5k and it was a struggle. That’s crazy. I’ve run three half marathons before!

So I decided to do something different. Two particular somethings, actually. First, I signed up for a five-mile run that’s taking place in mid November. That’s the thing I really don’t want to do.

I know, if you’re a true runner, five miles probably doesn’t sound like much. But I’ve just been running 2-3 miles at a time. Five miles feels like a stretch to me, and I needed a stretch goal to motivate me to increase the distance I’m running right now. Not a crazy stretch goal like running a marathon. A doable stretch goal.

Next, I went public with my plan. I told my wife about the five-miler and now I’m telling you.

What does this have to do with money?

This has everything to do with money, or any other aspect of your life you’d like to change. No matter what you’re pursuing, two of the best steps you can take toward achieving it are to find a way to box yourself in and then tell someone what you’re doing.

A word about boxing yourself in

If you’re trying to save for a car, boxing yourself in might look like opening a separate savings account for that goal and setting up an automated transfer of $200 per month from checking to savings.

That’s going to require something of you, like spending less on this or that, which you may not want to do. It’s a structure that boxes you in, moving you toward something important to you.

If you’re trying to build a retirement account, boxing yourself in might look like contacting your HR department and having them automatically transfer six or eight or ten percent of your salary to the 401(k) plan every paycheck.

If you’re trying to resolve some recurring financial issue in your marriage, boxing yourself in might look like setting up a meeting with a marriage counselor.

What I’ve seen in my running routine is that my current habits aren’t generating the results I really want. Getting to a better place is going to require doing something I really don’t want to do. The same may be true for you with whatever it is you’re trying to change.

A word about going public

I think it was former Notre Dame football coach Lou Holtz who said something like, “Be careful who you tell your troubles to. Some people won’t care, and others will be glad you have problems.”

I hate to sound so cynical, but something similar could be said for choosing who to talk to about your goals and commitments. Some people won’t care, and others may actually want you to fail. Many others just won’t be very invested in your success. They’ll forget about your commitments; they won’t ask you how you’re doing.

So, tell someone who truly cares—someone who’ll ask you about your progress and encourage you. Ask the person to put it in their calendar to ask you about it at least once a month. (Don’t worry, I don’t expect you to put my five-miler in your calendar, but going this public with my goal is motivating to me nonetheless.)

Is there something you’ve been wanting to do financially that isn’t happening? How could you box yourself in and who will you tell?

For more on this topic, read, Tapping Into the Odd and Powerful Force of Momentum.