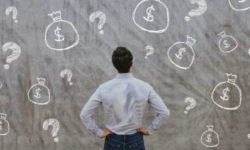 Those of us who write about money for a living can get a little carried away by some of the nitty-gritty details. That seemed to be the case in a surprisingly impassioned debate that sprang up recently over what a person’s higher priority should be—controlling spending or controlling saving.

At first, it seemed kind of silly to me. They’re just two sides of the same coin, aren’t they? But as I thought about it more, I realized it’s a pretty important idea. And I disagree with the conclusion two bloggers I generally respect came to.

It all started on the blog of highly regarded financial planner Michael Kitces. He believes trying to control your saving rate is unrealistic, arguing, “most households struggle to save because there is no money left at the end of the month to save in the first place.”

To which I would say, putting spending ahead of saving will virtually guarantee there will be nothing left to save!

He also said “there is remarkably little guidance available to households about what a prudent spending rate should be in the first place. In some of the largest categories, which tend to be financed with debt – e.g., homes and automobiles – lender guidelines… are based on what the lender believes will extract the maximal amount of interest with an acceptable level of defaults… despite the fact that many of those borrowers will be in over their heads and struggling just to make their repayments!”

I would argue that people are not helpless victims who are forced to borrow beyond their means. I’ve long encouraged people not to finance vehicles, and as for homes, my recommendation is to devote no more than 25% of monthly gross income to the combination of your mortgage, real estate taxes, and homeowner’s insurance—preferably no more than 20%.

So, yes, those decisions (housing and transportation) have much to do with controlling spending, BUT that controlled spending flows from a commitment to first give at least 10% of monthly gross income, save or invest at least 10%, and then consider what you can afford to spend on homes and transportation and all the rest.

I was surprised to see another financial blogger I like, J.D. Roth of getrichslowly.org, agree with Kitces’ premise. He wrote, “In the fundamental wealth equation, the two variables that you control are your income and your spending. You don’t directly control your saving. That rises or falls depending on the other two factors.”

But if you know that of your $5,000 monthly salary you can spend $4,000 on what you need and want, and if you box yourself in, if you control your giving and saving so that you truly only have $4,000 to spend, I’m confident you’ll figure out how to live on the $4,000 that remains.

I know this math doesn’t make sense on a calculator or a spreadsheet, but what I’ve seen over the years is that people have a much easier time living on 80% of their income than 100%. Given 100% to live on, people often end up living on 105% or 110%, financing the extra spending. In other words, a spend-first way of approaching money typically leads to overspending. But when giving and saving are higher priorities than spending, people are able to live on what remains.

The best way to save is to decide to save, proactively controlling your saving by automating it. It’s the same with giving. You don’t necessarily have to automate your giving, although you certainly could. You just have to make giving your top financial priority, creating a cash flow plan that allocates percentages of income to giving (and saving/investing) before making your allocations to other categories.

What are your thoughts on this chicken or the egg question? Which comes first — controlling spending or controlling giving and saving?

One Response to What Matters More — Your Spending Rate or Your Saving Rate?