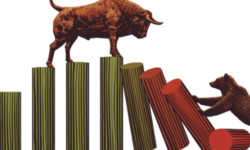 By Matt Bell on December 11, 2018 in Investing, Miscellaneous

If you have money in the stock market, you’ve probably noticed things have gotten a little bumpy. Here are some suggestions for handling the rough ride.

When it comes to money — and plenty of other things — the emotional extremes of fear and greed can get the best of us. But those who study behavioral finance say for most people loss feels much more painful than gain feels good.

When the markets are headed south and the headlines are filled with phrases like “sell-off,” “rout,” and “bear market,” linking those words to your future retirement or your kid’s college education can make for some mighty tight knots in your stomach.

For some investors, the brutal bear market of 2008 eventually became too much. Right about the time when stocks hit bottom in early 2009, they sold. And then they stayed on the sidelines. According to Gallup, the percentage of Americans with money in the market has fallen from 62% before the financial crisis to about 54% today.

From their seats on the sidelines, such former investors have watched as the Dow soared from its March 9, 2009 low of 6,547 to 24,423 today (even after some recent sharp declines)—a growth rate of over 270%.

History usually proves that not selling when the market gets volatile is the best course of action.

While the stock market has delivered the best returns, its upward trajectory has not been without bumps, bruises, and occasional terrifying drops. That’s just the nature of the market. However, a couple of facts may help ease your queasy stomach.

You Stand to Be Corrected

A stock market correction is typically defined as a decline of 10% from the market’s most recent high. Going back to 1928, there have been, on average, a little more than one correction per year, according to the Bespoke Investment Group.

In other words, downturns are to be expected and need not be feared.

You Must Be Present to Win

But what if you had gotten scared during some of the bumpier times along the way and temporarily pulled your money out? If you had missed the market’s 10 best-performing days within that 20-year period, your average annual return would have fallen to 3.5% and your balance would have tallied just $201,170.

That’s incredible, isn’t it? It shows the value of staying the course.

Read a few investing blogs or the headlines of financial magazines, and you’ll find it stunning just how conflicting the points of view are. One writer thinks the markets are headed higher, another is certain they’ll soon take a dive. They all have their reasons.

One of the best ways to navigate the noise is to have a written investment plan. I’m not just talking about a record of what you’re invested in — I’m talking about why you’re investing (what goal you’re pursuing); what your asset allocation is (the mix of bond- and stock-based investments you’ve chosen) and how you arrived at those decisions (hopefully with the help of a tool that factored in your time horizon and risk tolerance); how much you need to have for certain goals such as retirement or your kids’ college costs; and how much you’re committed to investing each month.

Your plan should include some what-if scenarios, such as what, if anything, you will do in the event of a market correction or bear market. With five or more years to invest and an appropriate asset allocation, hopefully your plan would state that you would stay the course during a downturn. If you are married, your plan should be understood and agreed upon by your spouse.

No one enjoys the ride when the markets get volatile. But keeping these three points in mind may help you travel the investing journey with less anxiety.

How are you getting through the current bumpy ride?