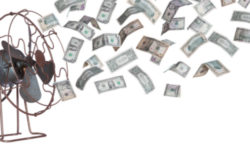 When you’re in your teens or early 20s, it can be really hard to think about something as abstract as retirement and to put away money for such a vague distant goal. But your age is a huge advantage in building wealth. Huge.

The thing is, it can either work for you or against you.

Financial Wind in Your Face

I once heard someone say she had $6,000 of credit card debt. Shrugging her shoulders, she casually described it as “not much.”

Not much? If she takes on no more debt and makes the minimum required payments each month, it could take her over 42 years to pay off that debt! That’s one stiff financial breeze blowing in the wrong direction.

If you have credit card debt or vehicle debt – any debt other than a reasonable mortgage – make it one of your highest priorities to get out and stay out of debt.

Now let’s see what happens when we get the wind blowing in the right direction.

Financial Wind at Your Back

Put Time on Your Side

The key to taking advantage of compounding is time. Here’s one more example to drive home this point.

Let’s say you invest $200 a month starting at age 20, but have to stop after 10 years. A friend of yours doesn’t start investing until age 30, but then goes on to invest $200 a month for the next 35 years. You both earn 8 percent per year on your money.

If you have kids, they’re in the best position to get the absolute maximum benefit from compounding. Help them get the wind blowing at their back. (Read What If Your Kids Had Their Retirement Funded Before They Finish High School?)

Want to learn more about investing? Pull some friends together, and go through the new Multiply study from Sound Mind Investing.