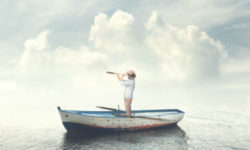 By Matt Bell on March 19, 2019 in Budgeting/Planning, Saving, Credit/Debt, Investing

Waiting can be tough. We seem to be hardwired to resist it. And our culture does us no favors here. Whatever we’re interested in buying, there are ways — and we’re strongly encouraged — to have it now. Paying for it? That can wait until later.

But there are great rewards for those who learn to wait.

And motivation can be found by seeing the big picture. A good starting point is to quantify your financial potential.

Money plus time = a lot!

Try this exercise yourself by plugging your current age, planned retirement age, current annual income, and assumed annual salary increase (I used a 3% in the example above) into this calculator.

By nature, we don’t tend to think long-term. For many of us, it’s difficult to imagine the future. But it can be very motivating to do so.

Keep yourself gainfully employed, earn a small raise each year, and you’ll generate a lot of income over your lifetime. The question is, what will you do with it?

The eighth wonder of the world

With the big picture in mind, now consider how the seemingly small steps you take today could be magnified over time.

Think about investing, for example. I remember reading a column by one of my favorite financial journalists in which he talked about the day in his youth when someone introduced him to the power of compounding—what Einstein reportedly called “the eighth wonder of the world.”

He had never heard of the concept before, but when he saw compounding in action, it was as if a light bulb switched on above his head. It motivated him to find the money to start investing.

In your first years investing, compounding may not seem like much of a big deal. But give it some time, and it will turn into a very big deal.

Let’s say you’re 20 years old, start investing $200 per month, do that for 50 years, and generate an average annual return of 7%. After 10 years, you will have invested $24,000. But because of the power of compounding, you will have earned about another $10,000. Nice, but not super impressive. At least not yet.

Now let’s run the example out 50 years. At that point you will have invested $120,000 — a great accomplishment unto itself. But because of the power of compounding, it will have turned into over $1 million. Now, that’s impressive.

This same type of thinking can be applied to every aspect of your financial life.

A lifetime of impact

Give away a portion of every dollar you earn, and you could play an important role in addressing some of the world’s great needs — sharing Christ, helping to alleviate hunger or poverty, and so much more. So much impact. So much joy.

In the middle of writing this post, I checked my email (yes, while writing about taking the long view, I got impatient and fidgeted away to something else!) and there I saw an update from a missionary we support. The impact she’s having is amazing. More people are hearing the Gospel, more are coming to faith. And we get to play some small role in that. Incredible.

Saving for something special

My wife and I will celebrate 20 years of marriage this year. Four years ago, we started dreaming of what we might do to celebrate. And we began saving.

Today, the airline tickets are reserved, the hotel is booked, and money for restaurants and other entertainment is in the bank.

Thinking big is the starting point. Let those goals motivate you to add them to your monthly cash flow plan and start chipping away. A little bit of money set aside on a regular basis for a long time can really add up.

It works both ways

Of course, debt can have a compounding effect as well—a negative effect. Let’s say you have a $6,000 balance on a credit card that charges you 18% interest, and you carry that debt from month to month, making just the minimum required payments each month. It could take you more than 17 years to pay it off, and cost you $5,700 in interest!

How to make it happen

Making any of this work requires margin, that wonderful cushion between your income and expenses.

Read One of the Sweetest Concepts in All of Money Management

It requires not spending too much on a house, not having a car payment, and being proactive and intentional about day-to-day spending. Some people reading this may see it as impossible. But it is possible.

I once had $20,0000 of credit card debt that I thought would never go away. It took time and it took patience. It wasn’t much fun along the way, but today I’m glad that it took four and a half years to pay it all off because it took that much time to change my way of thinking and to cultivate better habits.

Read How I Found Financial Freedom

Take the long view. Get a sense of your financial potential and start chipping away at whatever it is that motivates you, whether that’s getting out of debt or going on a special trip. Along the way, pray for patience. In our have-it-today culture, it will take some commitment to live differently.

Wouldn’t it be a shame to look back on your life and wonder, “What happened to all the money I made?” By the same token, wouldn’t it be satisfying to look back and know you made the most of what was entrusted to you?

Getting a feel for your financial potential can be very motivating. Be sure to take the next step, though, and turn that potential into a plan.