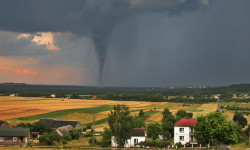 A prudent person foresees danger and takes precautions. The simpleton goes blindly on and suffers the consequences. – Proverbs 22:3

With Hurricane Dorian churning in the Atlantic, I’ve been praying for loved ones who may be in its path, and I’ve been thinking about our homeowner’s insurance coverage.

I still get a feeling of dread in the pit of my stomach every time there’s a severe thunderstorm or tornado warning in our area. It’s been that way ever since the summer of 2010 when we were living in the Chicago area and experienced one of the worst storms our community had ever seen.

It was dinnertime when the skies turned an ominous color and the winds started howling. I flipped on the radio just in time to hear that a tornado had been spotted nearby, so we took shelter in the basement. Since the news reports said the storm was moving quickly, I figured we’d be back upstairs soon enough.

But then I heard a disturbing sound coming from our basement bathroom, the sound of water gurgling. It was coming up through the drain in our bathtub. That prompted me to check our laundry room, where to my horror I saw water flowing quickly into our basement from a floor drain.

After asking my wife to take our three young children into the stairwell, I started frantically pulling what I could off the floor. Within a very short time, we had at least three inches of water covering our entire basement. When I took a minute to glance out our front window, I saw that our street was completely flooded. With the storm drains overwhelmed, the water had no where to go but up into the drains in people’s basements.

For the next three days I spent hour upon hour pulling things out of the basement, talking to various people at our insurance company, and hiring a company to rip up our laminate flooring and dry the basement with heavy-duty dehumidifiers and fans.

Here are some lessons I learned through that experience that may help you better prepare for a natural disaster.

Do You Have the Right Insurance Coverage?

If you have a basement, see if you have sewer and drain backup coverage on your homeowner’s policy. If not, strongly consider signing up. This is different than flood insurance. Fortunately, we chose to have this coverage. In fact, in reviewing our policy several years ago, I found out that our coverage totaled just $2,500 and did not cover furniture. We increased it to $5,000 and ended up needing every bit of that amount. I have since increased our coverage to $10,000.

During that same policy review, I asked about flood insurance and was encouraged to weigh the cost (about $400 per year) against the likelihood of a flood in our area. You can assess the risk of a flood in your area at FloodSmart.gov (Under “Understand your risk,” click on “Flood Map Service Center,” and then type in your address).

Since we’re not all that close to a river, and because the FloodSmart site described our neighborhood as an “area of minimal flood hazard,” we’re going without the coverage.

Here are some other items to check on your homeowner’s insurance policy.

It’s also a good idea to use a video camera to create a visual record of what you own. Just walk through your home, capturing all of your stuff and describing it along with your estimated value as you go. Update your inventory at least every five years.

Some Final Lessons About Preparing for Storm Season

Another lesson we’ve learned is that when storing anything in the basement, use shelves; do not store anything directly on the floor. And store your items in plastic containers, not cardboard boxes.

And one final point: think twice before stepping into a flooded basement. As the water spread throughout our basement, I called a neighbor who actually knows something about electricity and he told me if the water is below the electrical outlets, it’s probably safe.

I risked it, walking through the water to switch off our fuse box until the water drained out of our basement, and I’m still around to write about it. However, all of the advice I’ve read since then says not to set foot in a basement that has taken on water. Instead, you’re supposed to get your electric company to turn off the power from the outside of your house.

Have you learned any lessons about homeowner’s insurance or disaster preparedness that could benefit others?