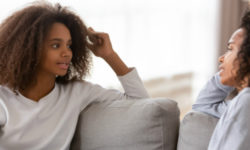 By Matt Bell on October 1, 2019 in Investing, Teaching Kids

If you’re going to help your kids learn about money, getting them started is one thing; keeping them going is another. Motivation can wane.

That’s what seemed to be happening the other night with our 15-year-old when he opened up a conversation about investing. Don’t get me wrong. It’s not like the wheels have come off, with him wanting to cash out in favor of buying some stuff right now. But I can tell that some hard realities are setting in. Like the Long time he may have to wait for the payoff.

As I’ve written before (see What If Your Kids Had Their Retirement Funded Before They Finish High School?), we helped each of our three kids open investment accounts last fall and encouraged them to follow the most aggressive strategy offered by Sound Mind Investing, where I work. While we encourage older investors to devote no more than 20% of the equity portion of their optimal asset allocation to the Sector Rotation strategy, I explained to our kids that they have time on their side. As long as they can handle the volatility they’ll likely experience, their long time horizon should give them a great chance of generating impressive long-term average annual returns. (The strategy has averaged over 17% per year since it was launched in 2003.)

Last fall turned out to be a tough time to start investing since the market—and therefore, our kids’ investments—tanked in the fourth quarter of 2018. But I’d far rather have them experience their first steep market decline while they’re still living at home, where we can easily talk about it. And they handled it just fine.

This year, things have gone better so far. But the other night, our oldest asked me some questions about his account. He wanted to know how long he’d have to wait before he could use some of the money. And then he asked how certain it was that the strategy would generate great returns long term.

The questions caught me a little off guard, and honestly, I was worried that he was rethinking this whole investment thing. It surprised me because he’s been so diligent about adding to his account. On a recent weekend, he earned $70 and asked me to add all of it to his investment account.

I told him he could take his money out right now if he wanted to. It’s his money. And it’s not in an IRA, so there would be no penalty. (Eventually, I’d like them to convert their accounts to Roth IRAs.) I also explained, as I have before, that the returns are not guaranteed. The 17% figure we’ve talked about is an average of how the strategy has performed over the past 16 years. It could perform better than that, and it could perform worse. Either way, there will likely be some very good years and some very bad years.

I then tried to remind him of some of the long-term benefits of starting this investment account at such a young age. If he could build the account to $3,000 by the time he’s 18 and then never added another penny, and if it continued generating a 17% average annual return, by the time he’s 70, it would be worth more than $14 million! Even accounting for inflation, it would be worth about $3.7 million—far more than the average person retires with.

I also told him that when he’s working a full-time job, having this account set up would take away a lot of pressure to set aside so much for his later years. If his company offered a match on a 401(k) plan, which I explained, he should absolutely invest enough to get the full match. But beyond that, he’d be free to save and invest for other things, such as a house or maybe his own business. It would give him options that a lot of other people don’t have.

He took it all in and seemed satisfied with the conversation. Not excited, but perhaps at least content to stay the course.

It’s tough. I get it. It’s a long time to wait for the payoff. But all of this—the questions, the disappointment, the grappling with the patience required—is why it’s so important to get kids in the conversation about money, and in the game with actual money, early. I want them to wrestle with this stuff while they’re still living at home.

I’ve heard that the reason so much of the financial literacy efforts taking place in schools hasn’t been effective is that it’s too theoretical, too abstract. Kids need to have real money involved if lessons are going to stick.

Yes, we need to teach. And we need to do our best to be good role models, which is why we talk about things we’re saving and investing for—things we’re waiting for. But the regular conversations—the opportunities for kids to ask questions and wrestle out loud with some of the things they’re sorting out—may be the most important part of the process.

What are some steps you’re taking to teach your kids about money? How are you helping them cultivate a long-term perspective?