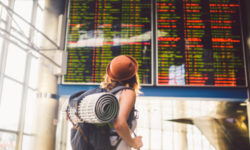 In so many areas of life right now, we need to be cautious. Don’t gather in groups. Keep your distance from people. Wear a mask when out in public. And on it goes.

With caution serving as the rule of the day, it’s understandable that many of us are cancelling summer trips. The risk of getting on an airplane seems far greater than the rewards that would have awaited us at our destination.

My family has been planning a late July trip to the Northwest. The idea was to meet up with other family members, spend some time in Seattle as well as Olympic National Park, and then take a train to Vancouver for a few days. As we’ve clung to the fading dream that the trip would still be possible, I received an email from my Chase credit card at the end of last month. I had booked the flights using miles received as a sign-up bonus. I could have transferred them to United Airlines, but booking the flights through Chase’s Ultimate Rewards site made the miles stretch further.

The email stated that United was offering to let us cancel the trip in exchange for a credit for future travel. It sounded like a courtesy:

United has extended their cancellation policy to all flights booked through December 31, 2020.

But it included a seemingly strange early deadline.

You can now cancel your flight by April 30 and they will issue you a credit to use for future travel with them.

That (artificial) deadline worked as intended, motivating me to call Chase. I wanted to make sure I didn’t miss out on the opportunity for the credit, but I also didn’t want to have to make the decision to cancel so soon.

The more I thought about it, the more I sensed that all was not as it seemed. Why would I have to cancel by April 30 when our trip is in late July? Three months in advance seemed unnecessary. Why couldn’t I wait a little longer to see if we really needed to cancel?

Then I came to find out that if I cancel the trip, I’m entitled to a travel voucher, which would have to be used by a certain date. But if the airline cancels, or even if it changes the itinerary (like the departure time), they become obligated to issue a refund—or, in my case, a reinstatement of miles as well as a refund of the fees or taxes paid.

Fortunately, I got connected to a great customer service representative who provided some very helpful information. For one thing, he assured me that I could cancel the flight all the way up to the day of travel and still get a credit.

In fact, after I let the deadline pass, I got another email telling me the deadline for cancelling our trip had been “extended” until the end of May. Cancel by then and I could get a travel voucher.

So it appears that the airline is trying to motivate me to act sooner than later in canceling the trip, hoping I’ll cancel before they do. But I figure the longer I wait, the better the chances that they’ll cancel the flight and I’ll be able to get my miles reinstated and my fees refunded.

Lots of confusion and frustration

Apparently, this situation of the airlines trying to avoid issuing refunds is happening a lot. At a hearing on Capital Hill last week, Democratic Sen. Richard Blumenthal of Connecticut accused the airlines of “continuing to mislead and deceive” travelers by providing vouchers instead of refunds, as reported by CNN.

“At best, airlines are just hiding the fact that customers are owed refunds if they want one. At worst, they’re actively not giving those refunds even when they’re asked. The thinking is: Right now we are in such a cash crunch that we want to maintain as much cash as possible —  we can deal with the reputation ramifications and legal ramifications down the road.”

Here’s the official rule, as issued by the U.S. Department of Transportation via an Enforcement Notice:

U.S. and foreign airlines remain obligated to provide a prompt refund to passengers for flights to, within, or from the United States when the carrier cancels the passenger’s scheduled flight or makes a significant schedule change and the passenger chooses not to accept the alternative offered by the carrier.  The obligation of airlines to provide refunds, including the ticket price and any optional fee charged for services a passenger is unable to use, does not cease when the flight disruptions are outside of the carrier’s control (e.g., a result of government restrictions).

So, at least as it pertains to the airlines, remember that whether you’re entitled to a refund or just a voucher is all about who cancels the trip. If you cancel a trip that’s still scheduled, it appears as though you are only owed a voucher. But if the airline cancels, you’re owed a refund. So don’t let them pressure you into cancelling before they do.

Have you cancelled a trip you had planned for this summer? What’s been your experience with getting a refund?