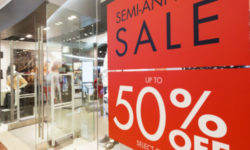 By Matt Bell on July 14, 2020 in Spending Smart, Psychology of Money

This weekend, I bought new shoes for two of our kids at a Nike Outlet store. When I got home, I told my wife what a “great deal” they were. The shoe boxes told the tale. In both cases, they showed a “suggested retail price” of $85 and listed “our price” at $64.99. But I got them for $35.

Seen through the lens of psychology, the “suggested retail price” was the anchor—the all-important point of comparison. “Our price” was — or at least implied — how much the store normally sells the shoes for. Since I paid even less than that, it served as another anchor—another important reference point.

Compared to the “suggested retail price” and “our price,” the actual price I paid seemed like a bargain. And that’s the whole idea.

According to Wikipedia, anchoring is “a cognitive bias that describes the common human tendency to rely too heavily on the first piece of information offered (the “anchor”) when making decisions.” Psychologists Daniel Kahneman and Amos Tversky were the first to identify this so-called “cognitive bias.”

Anchoring is such a common marketing practice that we hardly notice it.

When a restaurant menu highlights an especially expensive item, other lower-cost items seem reasonable, even if they cost more than we had planned to spend. Car dealers routinely list the “MSRP” (Manufacturer’s Suggested Retail Price). By comparison, the dealer’s price seems like a deal. And again, that’s the point.

You probably know of some retailers that always seem to be having sales. That’s anchoring in action. We love feeling like we’re getting a deal.

JCPenney once declared an end to “fake prices” — those designed to make their “sale” prices seem irresistible. Apparently, upper management thought its shoppers felt duped by their constant sales. So, in place of artificially inflated “regular” prices, the retailer introduced “fair and square” prices — its form of everyday low prices. It failed.

Apparently, what’s far more effective is to make people think they’re getting a deal, and the way to do that is to highlight the difference between a “sale” price and a “regular” price.

Anchoring is an especially important tactic in negotiations. Usually, whether selling or buying a home, or hiring or trying to be hired, the first person to mention an amount gains control. The first salary or price mentioned seems to have a magnetic force that keeps any counter offers relatively close.

Whose anchor is it?

The best way to resist the force of an anchor is to establish your own.

For example, the only way I know of to get past someone else being the first to mention a salary figure or home price is to be willing to walk away from the deal. It takes boldness, an unemotional detachment from the job opportunity or house or whatever else in order to establish a different anchor.

I know someone who got a job at a much higher salary than the one initially offered through that exact process. He was truly willing to not get the job, indicated the salary it would take in order for him to join the company, made the case for the salary, and both sides ended up satisfied with the deal.

Let’s go back to my shoe purchase. Before we left our home, I told our kids I didn’t want to spend more than $50 per pair. If our kids found shoes they loved that were anchored to a “suggested retail price” of $200 but were “on sale” for just $75, I would not have bought them. I had established my anchor and clearly communicated it to our kids, which helped manage their expectations.

What are some other examples of anchoring you can think of?

Take it to heart: “I am sending you out like sheep among wolves. Therefore be as shrewd as snakes and as innocent as doves.” – Matthew 10:16 (The context here is about the suffering the disciples should expect, but I think it’s acceptable to take this warning to heart as we go about stewarding the resources entrusted to us. In our consumer culture, incredible efforts are made to separate us from our money. We need to be shrewd.)

Take action: The next time you plan to buy something more expensive than groceries, decide in your mind what you’d be willing to pay before checking on prices. That way, you’ve set the anchor, not the seller.

Read more: Four Blind Spots to Watch Out For When Investing

If you haven’t done so already, why not sign up for a free subscription to this blog? Twice a week, you’ll receive ideas and encouragement for using money well.