“What does Jesus have against sleep?” One of our kids asked that question several years ago while we were on our way to church on a Sunday morning in December.

Our family had been invited to lead “a responsive call to worship” that morning – a short time at the beginning of the service in which we were to read some Scripture related to Advent and then the congregation would respond.

Advent begins on the fourth Sunday before Christmas. It’s a season of anticipation, a time of preparing to celebrate Christ’s birth and also to prepare for His return. So we were asked to read from Mark 13, where Jesus told His disciples to “keep watch because you do not know when the owner of the house will come back…If he comes suddenly, do not let him find you sleeping.”

As we practiced on the way to church, apparently the part about not being found sleeping made it sound as if Jesus was all about work and no rest. I pointed out that it was really a metaphor. To be awake is to live our lives in a state of constant preparedness for Christ’s return, which means living in relationship with Him and living as He taught us to live.

One of my job hazards is a tendency for my mind to drift toward the financial implications of, well, just about everything. So, as our pastor delivered what I’m sure was a great Advent message, I kept thinking about what it would look like financially to live in a constant state of preparedness for Christ’s return.

If He came to our house tomorrow, it’s a sure bet that things would look a little messy. I don’t think He’d care about that. But I think He would care about what He saw inside our checkbook and our hearts.

I think He’d want to see us living with contentment.

He wouldn’t want to see a hunger for stuff we don’t have or jealousy over what other people have; He’d want to see gratitude for what we do have.

He wouldn’t want to see us living under a cloud of guilt or shame over past financial mistakes. Sure, He’d want to see us taking responsibility for cleaning things up, but He’d want us to know that He is quick to forgive all who seek His forgiveness.

I think it would please him if He saw that our financial lives were marked by patience – a willingness to wait until we can afford things before we buy them, and the realization that our ultimate happiness won’t be found in what we can buy.

I think He’d understand if those attitudes didn’t come naturally or easily, and if we sometimes felt uncertain about the economy. But He’d want to see that we’re leaning into Him for strength, encouragement, and perspective.

If Jesus showed up tomorrow, I think He’d want to see that we’re not winging it with His money – that we have a plan. After all, according to His own instruction manual, it says those who profit are those who plan (Proverbs 21:5).

I think He’d want to see us living generously – not just because the Bible teaches that generosity is to be our first financial priority (Proverbs 3:9), but because generosity has become a natural way that we express our gratitude for all that He’s done for us.

I think He’d want to see that our finances are in order – that we keep some money in reserve (Proverbs 21:20), are cautious in our use of debt (Proverbs 22:7), take a slow and steady approach to investing (Proverbs 13:11), and try to be smart about spending decisions big and small. After all, He said that faith and finances are tightly intertwined (Luke 16:11).

Company’s Coming, But We Don’t Know When

When I was new to the whole experience of living a life of faith, I remember reading the Parable of the Talents (Matthew 25:14-30) and having one of those ah-ha moments. For the first time I saw the big picture of what it means to manage money from a biblical perspective.

In that parable, Jesus tells of a master who was going on a journey. While he was gone, he put three servants in charge of his property.

Of course, the master is The Master – God. And the servants represent us. God has temporarily entrusted everything we have to our care. We don’t really own any of our stuff; it all belongs to God. It’s all to be managed according to His instructions and for His purposes.

And then I read these words: “After a long time the master of those servants returned and settled accounts with them.”

My eyes lingered on that line. I realized that one day I will have to give an account for how I managed the resources God entrusted to me.

The only way to prepare is to always be prepared.

How Prepared Are You?

What’s your response to the idea of living in a constant state of financial preparedness? Does it overwhelm you?

I don’t think Jesus would want you to feel overwhelmed, and I know He wouldn’t want you to think you’re on some sort of performance plan.

If He returned tomorrow, mostly I think He’d want it to be clear that we cherish our relationship with Him above all else. Yes, He’d want to see the fruit of that relationship, that our financial attitudes and behaviors are being increasingly shaped by His teachings and leadings. But also that we live with a sense of peace about the areas that are still kind of messy. A sense of peace that’s been shaped by His grace.

One Response to Are You Financially Asleep or Awake? An Advent Lesson 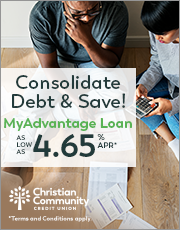