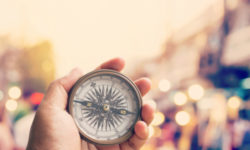 By Matt Bell on January 26, 2021 in Budgeting/Planning, Credit/Debt, Spending Smart

Using money well is one of those things we never get fully right. We’re constantly trying to make changes, improvements. And the bigger the change, the greater the challenge.

That’s why I’ve been taking an in-depth look at the findings from Switch, Chip and Dan Heath’s excellent book on “How to Change Things When Change is Hard.”

In the first post, we looked at ways to overcome analysis paralysis and get our lost-in-the-details analytic side moving toward the change we want. In the second post, we examined how to tap the power of our emotions.

In this post, we’re looking at ways to Shape the Path toward change.

The Heath brothers talk about an experiment involving two groups of moviegoers. Group one was given an enormous bucket of popcorn. Group two received a somewhat smaller, but still huge bucket. The buckets were weighed before and after the movie. Group one ate noticeably more than group two.

The lesson? In many cases, it’s easiest to bring about positive change by changing our environment.

It wasn’t that members of group one were more gluttonous than those in group two or the products of poor parenting. It was that their popcorn containers were bigger.

There are all kinds of implications here for wise money management. For example, research has shown that the more television we watch, the less money we save. The researchers explain that frequent TV watchers don’t just see more commercials. They also regularly see people on TV programs living lifestyles that are more expensive than their own, and that tends to increase their spending on clothing, cars, and more.

You could tell yourself to save more, believe you should save more, and even want to save more. But changing your environment in ways that lead to less TV watching, like canceling your cable subscription or moving your TV to a less convenient part of your house, may end up being more effective. (One of the best decisions we made when we moved to our current home in 2012 was putting our TV in the basement!)

Here are some other simple ways to improve your finances by tweaking your environment:

As the Heaths point out, when behavior is habitual, it doesn’t require much willpower. But that begs the question: how do you build a new habit? The Heaths suggest the use of Action Triggers, which they describe as preloading decisions.

Planning to go for a run this week? Maybe you will; maybe you won’t. But if you preload the decision by committing ahead of time which day and what time you’re going, and if you think about what route you’ll take, chances are good you’ll go for that run.

As for financial habits,

Much of our behavior is shaped by the behavior of those around us. Unfortunately, when it comes to money it’s tough to find very many people who are doing things well. You may need to settle for finding a handful of individuals who get the money thing right.

Jude and I have several friends like this. They live beneath their means with great contentment. Just knowing them and seeing some of the countercultural decisions they’ve made reinforces all that we believe about wise money management and encourages us to stay the course.

What changes are you trying to bring about in your financial life? How could you shape the path toward the goal you’re pursuing?

Know someone else who would benefit from this article?  Please forward a link to my site.  And if you haven’t done so already, you can subscribe to this blog by clicking here.  Two or three times a week, you’ll receive ideas and encouragement for using money well.