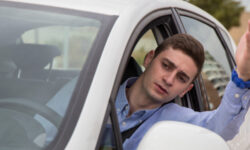 By Matt Bell on November 15, 2022 in Faith & Finances, Psychology of Money

As I sat at a red light in our neighborhood last week, waiting to make a right-hand turn, my attention was focused on traffic coming from my left. As I waited, I committed a grievous sin. I didn’t notice that the oncoming drivers were slowing down because their light had turned red and mine had turned green. My less-than-instantaneous reaction prompted  the driver in back of me to honk his horn.

It wasn’t a gentle, toot, as if to say, “Excuse me but you may not have noticed that the light is now green.” It was a full-on, lingering blast, telling me in no uncertain terms that I had no right to be on the planet, and certainly not on this particular road.

“Good morning to you, too, neighbor,” I thought. Or something like that.

It reminded me of a study I read about in which researchers spent many hours observing drivers at traffic lights. They wanted to know what typically happens in situations similar to the one I just described. What happens when the driver in the first position waiting at a traffic light doesn’t notice right away when the light turns green? Will driver number two, the one right behind driver number one, honk or not?

What the researchers discovered, after watching this scene play out time and time again, is that what mattered most was the type of car being driven by driver number one. If it was a newer car, an expensive car, a prestigious car, then the driver in position two tended not to honk. But if it was an older car, a not-so-expensive car, a not prestigious car — perhaps a 2010 Honda Accord, for example (ahem) — then the driver in position two tended to honk.

That’s interesting, isn’t it? What do you think it says about our relationship with money? Does it say that we respect money? That we value people who have a lot of money more than those who don’t?

Dear brothers, how can you claim that you belong to the Lord Jesus Christ, the Lord of glory, if you show favoritism to rich people and look down on poor people?

If a man comes into your church dressed in expensive clothes and with valuable gold rings on his fingers, and at the same moment another man comes in who is poor and dressed in threadbare clothes, and you make a lot of fuss over the rich man and give him the best seat in the house and say to the poor man, “You can stand over there if you like or else sit on the floor”—well, judging a man by his wealth shows that you are guided by wrong motives.

The traffic light study also reminds me that appearances and reality are sometimes not at all acquainted with each other. That point was made very clearly by the authors of my favorite secular money management book, “The Millionaire Next Door.” What the title conveys is what the authors’ research found: Oftentimes, the truly wealthy are people who don’t necessarily look the part, and just as often, people who do look the part are actually living beyond their means.

Still, since we don’t really know how people are doing financially, our regard for people, and unfortunately, our treatment of them, is probably driven more than we realize by how they appear to be doing.

It would be good for all of us to be mindful of this. When we spend time with a friend who we know is especially wealthy and another who isn’t. When we’re going about our daily lives and interacting with people we don’t know personally. And yes, when we’re in the second position at a traffic light and the person in front of us doesn’t notice when the light turns green.

6 Responses to Honk if You Love Money