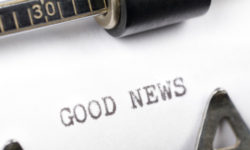 Most people love a good story, especially a positive one. A story of overcoming, of living for something bigger than ourselves, of making a difference.

Over the years, I’ve heard many people’s remarkable financial stories, which has been one of my favorite parts of writing about biblical money management for a living.

The story of Karen and Scott. Karen had so much debt before they got married that Scott referred to it as a “reverse dowry.” But from day one of their marriage, he owned it. Karen would talk about how bad she felt about her debt. Her debt was holding them back. Her debt was keeping them from buying a home. And every time, Scott would quickly, gently correct her: “It’s our debt.” That’s servant leadership. That’s love. And that’s just part of their extraordinary story.

The story of Carol and Tim. They thought they couldn’t have kids, so they bought a home that required both of their incomes. It wasn’t especially large or lavish, but it was on a quiet, tree-lined street a very unique and special little town. It reminded Carol of her childhood home. She called it her dream home. Not long after moving in, they got pregnant. Of course, right? For five long years, they tried to make a go of both of them working, but Carol longed to be home with their child. So they gave up the dream home and moved to a less expensive home in a much more ordinary town nearby.

As she reflected on the move, Carol said, “Without realizing it, I think we were trying to fit in to the culture. Our identities were in where we lived and what we did. They weren’t where they should be. When we made this move, it stripped away a lot of things for us. I think of it as kind of a time out. It’s been a reminder that we are just as treasured and just as worthy if we live here as if we live somewhere else.”

The story of Jody and Bob. They’ve made some tough decisions over the course of their marriage, like adopting a child because they felt called to. They didn’t even have the money, but God provided. I know, that sounds trite. But He really did. And something that emerged from the gratitude with which they live their life is what they call The Blessing Box. Every time they experience God’s blessings—in big ways and small—they write a note about it and put it in The Blessing Box. Then, during their Thanksgiving meal, they open the box and read the notes. They want to remember God’s goodness. And they want their kids to remember, and to develop hearts of gratitude as well.

I could go on and on. I’ve been entrusted with the candid stories of many people’s financial lives. And I hope that all who have heard the stories have been as blessed as I have.

Now I’d like to tell more stories. Lately, my desire to hear them and share them has been magnified.

I think it’s a reaction to what’s happening in our world. I used to be a news junkie. I enjoyed being informed. But over the past year or so, I’ve been so put off by the news that I haven’t wanted to take it in. It’s become so divisive, discouraging, and even depressing.

So, in the little corner of the world where I work, personal finance, I want to start telling more stories. Positive stories. Encouraging stories. Life-giving and life-changing stories.

Which brings me to a request. Would you send me such a story? I’m sure you have one. I’m sure you’ve lived one.

You may not think of yourself that way, but think harder. You can probably come up with something you did financially that took some courage and it made things better — for your family, your friends, or in some other way.

And you probably know someone else who has done the same.

So send me an email and tell me a little bit about the story you have in mind. You don’t have to tell me the full story. I’ll follow up to learn more of the details.

Just think about something you’ve done financially that took some faith. Maybe something that required swimming against the current of our culture in order to accomplish something that made a difference. Something that helped your marriage, shaped your kids, or expressed your faith.

Positive, encouraging stories have the power to change lives.

It isn’t about bragging. It’s about being an encouragement to others.

Therefore encourage one another and build each other up, just as in fact you are doing. – 1 Thessalonians 5:11