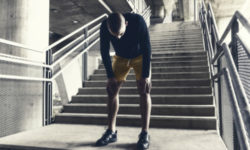 One of our sons recently told me about some things that have been bothering him. He’s making good decisions, building good habits, and getting good grades. But he can’t quite see the point in some of the things he’s studying. And all the homework sometimes makes life feel like a grind.

I did my best to listen and make sure he felt heard. And then I tried to encourage him to think longer term. To find a motivating reason to do the work.

As we were talking, a book came to mind. Actually, just the title. “A Long Obedience in the Same Direction,” the classic by Eugene Peterson about “discipleship in an instant society.” I haven’t even read the book and yet is speaks to me.

A danger we experience in our headline-driven world is that we often see the trophy presentation without thinking of all the years of hard work, frustration, doubt, and disappointment that led up to the celebration.

The unseen parts of the story

I thought about that while watching “First Man” recently, the story of Neil Armstrong and all that went into the historic space flight that made him the first man on the moon. Depending on how old you are, you may remember seeing it on TV. At very least, you’ve probably seen a video of it since, and you’re familiar with Armstrong’s words: “That’s one small step for man, one giant leap for mankind.”

The film shows the parts of the story most people aren’t familiar with. The incredible intellectual challenge involved in the mission. The intense physical training. The astronauts who died in training or in missions leading up to Apollo 11. Years of work, preparation, and sacrifice.

Television…sustains the illusion that nothing takes time. – Lewis Lapham

It’s the same idea Jim Collins wrote about so vividly in his business classic, “Good to Great.” He used a flywheel to describe the time and effort that enables some businesses to break from their competitors and achieve remarkable sustained success.

As I wrote in, Success Goes to the Steady, Not the Speedy, “A flywheel is a heavy disk that helps to maintain a constant speed of rotation in a machine or to store energy. Collins describes it as ‘a massive metal disk mounted horizontally on an axle, about 30 feet in diameter, 2 feet thick, and weighing about 5,000 pounds.’

It takes every bit of muscle you can muster. You push and push. After several hours you get it to make one full rotation. You keep pushing. Eventually it moves a little faster – a little faster. Hours later you’re getting that crazy contraption to make two rotations per hour.

But the flywheel represents the steps you’re taking in pursuit of your dream or a goal that matters to you. So you keep going. And finally, it becomes easier. In fact, at some point you notice that the wheel is moving from its own momentum.”

Something worth having is worth working for

It’s how a championship is won. It’s how a marriage goes the distance. And it’s how so much of money management works.

You cultivate some good habits (that step alone often involves numerous discouraging setbacks). You stay with it. You keep turning the flywheel, running the laps, learning to overcome selfish tendencies, making deposits.

Are you working your way out of debt? Building savings? Following an investment strategy that breaks your heart sometimes? Trying to get on the same financial page with your spouse after years of frustration and heated disagreements?

There will be days when you won’t want to do the work. You’ll be discouraged by stories of overnight successes. Those aren’t signs to quit. They’re reminders that you’re human and the world is full of a lot of noise that’s not worth paying attention to.

Cardio is like that for me. I do some form of a cardio workout three days a week. Every now and then, I look forward to it, but mostly I don’t. So why do it? Because I’d like to grow old with Jude. And I’d like to be around long enough to see each of our kids graduate from college, find their life’s work, marry well, and have kids of their own.

You need a reason to do the work.

And while anticipating doing the work may not always feel good, having done the work always does.

Financially speaking, what are you pursuing right now? And why?

6 Responses to Doing the Work